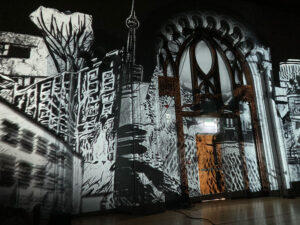 On 13 August Robert Motyka together with another Polish artist in residence: Marta Adamowicz led us through a magical audio-visual projection experience listening to the stories and perspectives of Polish residents in Edinburgh, followed by a fascinating provocation led by Prof Tanja Bueltmann “GO HOME – Immigrant views on belonging and identity” finished off with the beautiful traditional Eastern European harmonies of a capella group DAVNO. Polish pastries were be served! 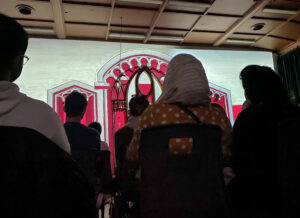 ‘City of Homes’ is an audio-visual artwork – an outcome of residency by Marta Adamowicz and Robert Motyka. Artists have set out to work with the Polish community in Edinburgh to invoke a discussion and collect accounts of the immigrant experience and to establish if a connection exists between architectural structures and the concept of ‘home’.

They edited images and interviews with participants into a spectacular experience where sound and animation tell very personal stories of migration and belonging.

The artworks (linocut prints and collages) created during the series of workshops with the artists will be shown during the exhibition opening on the night before the premiere screening.

The evening was finalised with the performance from the Edinburgh’s own Eastern European Folk Music Ensemble DAVNO – a female collective bringing the unique traditional sounds of the region to Scotland. Pierogi were served.