An evening of music, performance, visual art and conversation devised and directed by Robert Rae with Shatha Altowai, Saber Bamatraf and Ghazi Hussein.

Saber and Shataha arrived in Edinburgh from Yemen mid-pandemic, when opportunities for collaboration were limited. Able to respond quickly,  Robert worked with them to develop an appropriate collaborative process. Saber hoped to work with Scottish musicians, and in response to Art27’s Human Rights agenda, Shatha wanted to to pursue her art in “Scratched Identities”, together they wanted to find a way to tell their story.

Robert started the devising process by creating the dramatic structure that best facilitated the story  – which centred around the custom of men and women household visitors being seperataed by a curtain. It was imposrtant to avoid playing into an Isalamaphobic agaenda but to show the lived experience of Shatha in a society polarised by war where transgression of such customs has become life threatening. To help develop this we drew resident poet Ghazi Hussein into the devising team.

Having taken the decision to present in Arabic this infromed the casting process, Robert drew upon the Arabic speaking cast of Robert’s feature film TROUBLE SLEEPING with Waseem Aboaklain and Seham Ali, and new participants Ahmad Shaikh Ali and Azza Mustafa Dafaalla joining the team for rehearsals and performances. 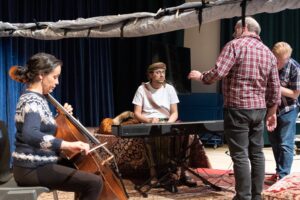 Playing for two nights as an integrated musical and theatre performance, it was followed by an expert led panel discussion that on the first night highlighted the situation for artists in War and the second the bombardment of Yemen and the deepening humanitarian crisis. 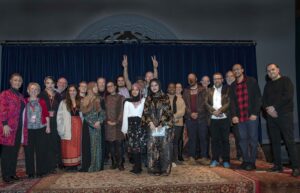